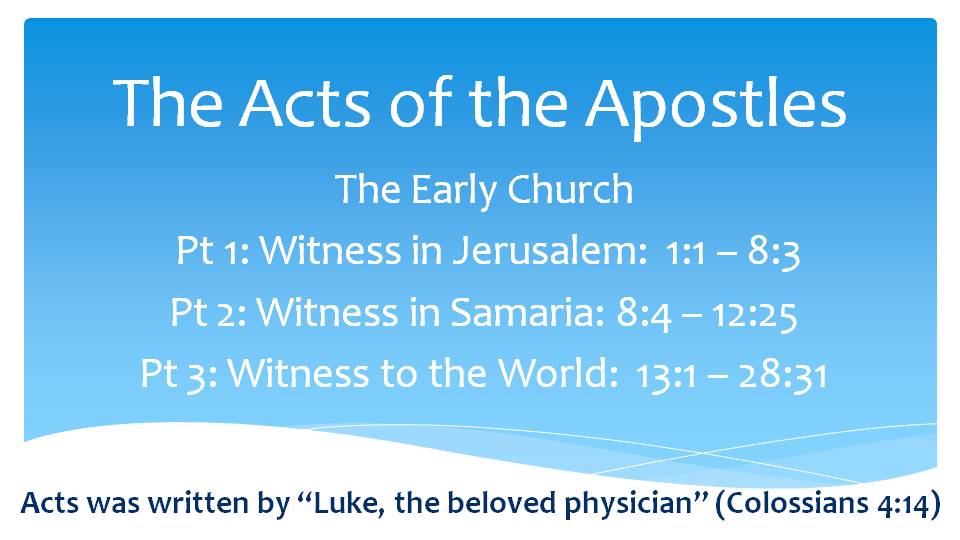 The book of Acts was written by Dr. Luke, a close associate of Peter and especially of Paul.  We know from Colossians 4:14 that Luke was a medical doctor.  While some scholars believe that Acts was written after the fall of Jerusalem in AD 70, the strongest evidence attributes the book to AD 63 during Paul’s first imprisonment in Rome.  Couple thoughts on dating Acts:  First, it best explains the abrupt ending where Luke notes that Paul preached as a prisoner in Rome for two whole years.  Secondly, Rome’s tolerance of Christianity came to a quick end when Nero became emperor in AD 64.  Third, Luke does not mention Nero, nor the falling of Jerusalem, nor Paul’s death.  Had he penned Acts later in his ministry, he certainly would have mentioned these three important details.  Perhaps most importantly, the book of Acts does not mention any of Paul’s latter ministry, nor does it reflect any of Paul’s epistles.

The Gospel of Luke ends with a final statement by Jesus just before His Ascension:  “… and repentance for the forgiveness of sins will be preached in His name to all nations, beginning in Jerusalem.  You are my witnesses of these things.  I am going to send you what my Father has promised;  but stay in the city until you have been clothed with power from on high.”  All four Gospels make a similar statement about being witnesses.  What is a witness or what does it mean to be a witness?

The book of Acts covers the growth of the early church from approximately 33 AD until 63 AD, a span of roughly 30 years.   Based upon Acts 1:8 we can divide the book into three phases or parts.  The first part, Acts 1:1 through 8:3 covers the spread of the Gospel in Jerusalem.  In the second phase, Acts 8:4 through 12:25, we see the Gospel move in Judea and Samaria, while the third part, Acts 13:1-28:31, focuses on the Paul's ministry to the world.  With that introduction, lets begin with Acts 1:1-2... 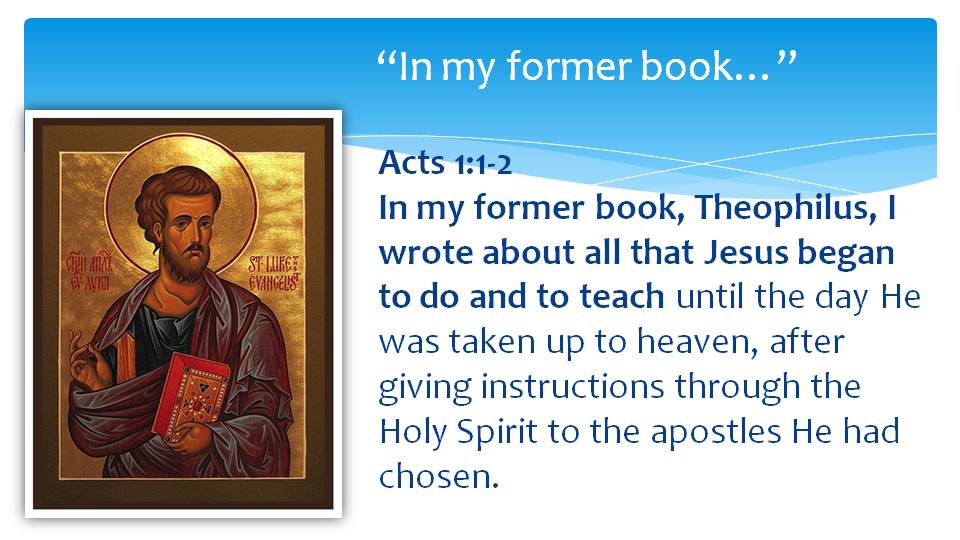 We have no idea what Luke actually looked like, but 1500 years after the fact, Guido Reni painted “Santo Lucas,” in 1621.   Acts 1:1 begins, “In my former book, Theophilus, I wrote about all that Jesus began to do and to teach.”  We know that the “former book” was Luke’s Gospel.  But who was Theophilus?  There are two trains of thought.  Since Theo means God and Philus means friend, it is possible that Luke’s intent was as a generic title for all “friends of God.”  The other possibility is that their was literally a man of high status with the name Theophilus.  Some attribute this Theophilus as a governor in Antioch – (Luke’s home town).  Others feel that Luke was writing to a lawyer in Rome on Paul’s behalf.  It probably doesn’t matter too much either way but I prefer the generic interpretation.

In verse two Luke recalls the words of Jesus concerning the Holy Spirit.  What is the role(s) of the Holy Spirit?   While many of us, including myself, think of Acts in terms of the work of the Apostles (especially Peter and Paul), the reality is that Luke is writing about the Acts of the Holy Spirit.  We will continue to see this theme throughout the book.  Perhaps the greatest lesson for us is that we need to learn how to rely upon the Holy Spirit.

Continuing at verse three:  "After his suffering, he presented himself to them and gave many convincing proofs that he was alive. He appeared to them over a period of forty days and spoke about the kingdom of God.  On one occasion, while he was eating with them, he gave them this command: “Do not leave Jerusalem, but wait for the gift my Father promised, which you have heard me speak about.  For John baptized with water, but in a few days you will be baptized with the Holy Spirit.”

What were some of the proofs that Jesus was alive?   How many can you recall?  Personally, I enjoy the story (Luke 24:15-49) on the road to Emmaus, and the interaction of Jesus with "doubting" Thomas.  Thomas had to touch the scars in Jesus' hand and side before he believed.  What gift does Luke note in verse four?   How much time transpired between the Ascension (last verses of Luke) and this “gift” in Acts 1:4?   What did the Apostles do during this time?   What does it mean to be baptized with the Holy Spirit?  Ephesians 5:18, “Do not get drunk on wine, which leads to debauchery.  Instead, be filled with the Spirit….  The Greek term translated “be filled” really means keep on being filled – a continual process.  This is not so difficult to understand if you compare it to salvation.  Salvation occurs once in the life of a Believer.  At that moment we are baptized with the Holy Spirit.  Yet, we are also to become Christ-like.  This is a continuing process of discipleship which requires our cooperation.  Likewise, we need to continue yielding to the Spirit, exuding the Fruit of the Spirit, and developing the Spiritual gift(s) as they are given to us.  We call this cooperation, discipleship; and we call the divine role sanctification.

Continue reading from verse 6:   "Then they gathered around him and asked him, “Lord, are you at this time going to restore the kingdom to Israel?”  He said to them: “It is not for you to know the times or dates the Father has set by his own authority.  But you will receive power when the Holy Spirit comes on you; and you will be my witnesses in Jerusalem, and in all Judea and Samaria, and to the ends of the earth.”  After he said this, he was taken up before their very eyes, and a cloud hid him from their sight."

The apostles were still a bit confused about Jesus' message and purpose.  They assumed, from Old Testament passages, that the Messiah was coming to form a Kingdom.  They further assumed that this Kingdom would be governmental and thus the ending of Rome.  Rather than go into detail, Jesus assures them that they do not need to know the specifics.  We can hold on to this same assurance when similar questions arise in our minds!

Along with the Great Commandments (Matthew 22:37 & 22:39), Acts 1:8 and the Great Commission form the foundation of the Church – with Jesus as the Cornerstone!

There is so much theology in Acts 1:8:  The role of the Holy Spirit.  Our role as a witness.  The flow of the Church from Jerusalem, into Judea and Samaria, and then to the ends of the earth.  Overlay that with Matthew 28:19-2 and we add the Trinity.  Baptism.  Role of the Church.  Eschatology, the current world will end.

Lets continue at verse 12:  "Then the apostles returned to Jerusalem from the hill called the Mount of Olives, a Sabbath day’s walk from the city.  When they arrived, they went upstairs to the room where they were staying. Those present were Peter, John, James and Andrew; Philip and Thomas, Bartholomew and Matthew; James son of Alphaeus and Simon the Zealot, and Judas son of James.   They all joined together constantly in prayer, along with the women and Mary the mother of Jesus, and with his brothers."

From Exodus 16:29, “Let no man go out of his place on the seventh day…”  It was thought necessary to determine the amount of walking that was allowable, which was fixed at 2000 paces, about 2/3 of a mile.  The group walked from Bethany a short way to the Mount of Olives.  When you stand on the mount of Olives you face Jerusalem to the north and Bethany to the south-west, not more than a mile apart.  They did what they were told to do and waited in Jerusalem for the Holy Spirit - their source of power.  Like the Apostles, it is our job to witness.  It is the Holy Spirit that has the power to convict, empower, counsel, and discern faith.

One of Jesus’ brothers was named James, the author of the book of James.  We will learn more about James later in Acts.   What do you think that they talked about as they waited?  Would you have been encouraged or discouraged at this time?

Continue reading at verse 15, "In those days Peter stood up among the believers (a group numbering about a hundred and twenty)  and said, “Brothers and sisters, the Scripture had to be fulfilled in which the Holy Spirit spoke long ago through David concerning Judas, who served as guide for those who arrested Jesus.   He was one of our number and shared in our ministry.”  (With the payment he received for his wickedness, Judas bought a field; there he fell headlong, his body burst open and all his intestines spilled out.  Everyone in Jerusalem heard about this, so they called that field in their language Akeldama, that is, Field of Blood.)  “For,” said Peter, “it is written in the Book of Psalms:  “‘May his place be deserted; let there be no one to dwell in it,’ and, “‘May another take his place of leadership.’  Therefore it is necessary to choose one of the men who have been with us the whole time the Lord Jesus was living among us,  beginning from John’s baptism to the time when Jesus was taken up from us. For one of these must become a witness with us of his resurrection.”

Seems like a strange criteria.  They didn't want some educated, nor someone with a titled.  Why do you suppose that they wanted a man who had been with Jesus from the beginning?

Let us continue reading at verse 23, "So they nominated two men: Joseph called Barsabbas (also known as Justus) and Matthias.  Then they prayed, “Lord, you know everyone’s heart. Show us which of these two you have chosen  to take over this apostolic ministry, which Judas left to go where he belongs.”  Then they cast lots, and the lot fell to Matthias; so he was added to the eleven apostles."

We do not know much about Matthias as he is only referenced in the Bible in Acts 1.  Non-Biblical (Greek tradition) indicates that he ministered in Judea and later near the Caspian Sea.  Various traditions hold that he was beheaded in Colchis, killed in Judea, or died of old age in Jerusalem.  So, what do we make of Matthias?  What do we make of the method used to select Matthias?  Should the Eleven have waited for the Holy Spirit?  Was Saul of Tarsus called to be the replacement?  We can only speculate.

Posted by Bruce Powers with
(Login/Register to leave a comment)