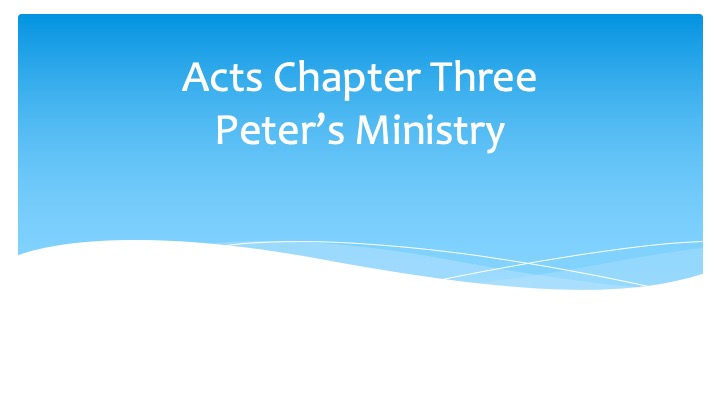 Luke does not tell us how much time has transpired between the end of chapter 2 and the beginning of chapter 3.  Luke simply begins with a narrative:  "One day Peter and John were going up to the temple at the time of prayer—at three in the afternoon." 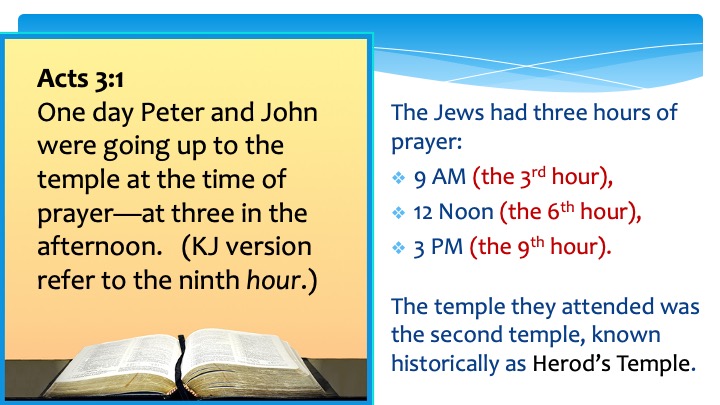 The NIV translates the times correctly but if you were reading the KJV you might see the ninth hour.  Jewish time is calculated from sun rise, which is 6:00am is Israel.  Thus the third hour is 9am, the sixth hour is noon, and the ninth hour is 3pm.   Before we continue with the text, lets do a quick review of the Temple... 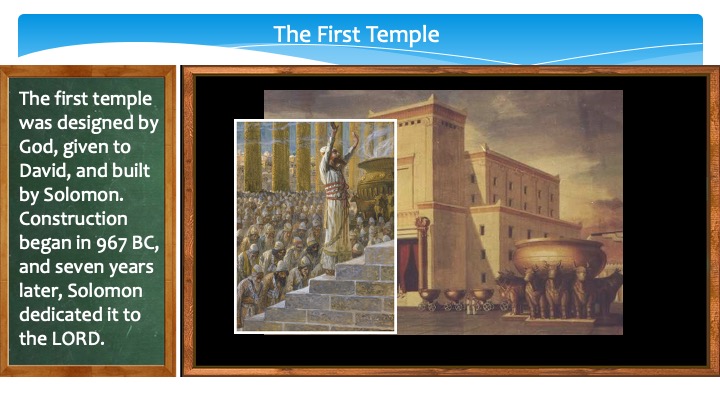 The first temple was designed by God, given to David, and built by Solomon.  Construction began in 967 BC, and seven years later, Solomon dedicated it to the Lord. That temple was destroyed by the Babylonians in 586 BC.  They razed Jerusalem and took the best of the Jews into captivity.  (Daniel was among the captives.)  The Persian emperor Cyrus decreed that a second Temple be built on the same site.  The books of Ezra and Nehemiah summarize the construction of this Second Temple between 536 BC and 516 BC.  The Second Temple was in service for well over 400 years when King Herod came into power around 20 BC. 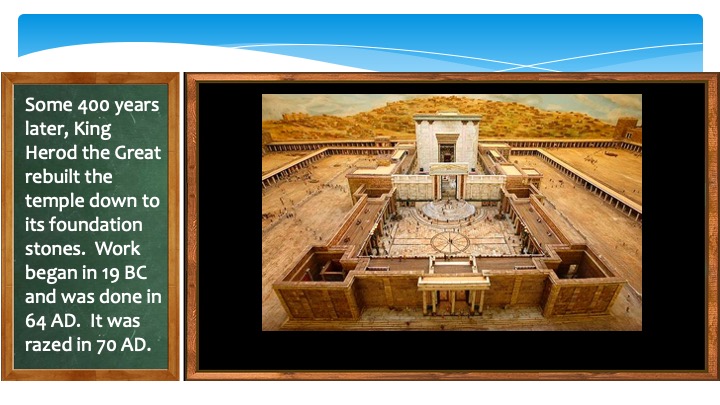 King Herod thought that the Jews would be more accepting of him if he remodeled the Second Temple.  So Herod the Great begins the remodeling project in 19 BC.  He dies in 2 BC and the project gets completed in 64 AD.  Jesus ministry occurred during this remodel period!  It was comprised of an out court (court of the Gentiles), the women’s court, the court of Israel, the court of the Priests, and the Holy of Holies (the large white marble structure).  Herod’s temple was twice the size of Solomon’s Temple.  The second temple was completed in 64 AD and then destroyed by the Romans in 70 AD.  (Just as Jesus predicted.)  All that remains of the Second Temple is the retaining wall on the west side of the Temple Mount.  The Dome of the Rock sits where the Temple once stood.

Back to Acts 3:3-6, "Now a man who was lame from birth was being carried to the temple gate called Beautiful, where he was put every day to beg from those going into the temple courts. 3 When he saw Peter and John about to enter, he asked them for money. 4 Peter looked straight at him, as did John. Then Peter said, “Look at us!” 5 So the man gave them his attention, expecting to get something from them.6 Then Peter said, “Silver or gold I do not have, but what I do have I give you. In the name of Jesus Christ of Nazareth, walk.”

Peter and John were drawn to this man.  The beggar was hoping for a few coins, but the Holy Spirit had a far greater gift in mind.  After getting his attention, Peter and John told him that they didn't have any coins.  Rather, Peter continued, "In the name of Jesus get up."  Now it was the beggar's turn to respond.   Would he turn away or would he accept the incredible gift?

Let us continue at verse 7:  "Taking him by the right hand, he helped him up, and instantly the man’s feet and ankles became strong. 8 He jumped to his feet and began to walk. Then he went with them into the temple courts, walking and jumping, and praising God. 9 When all the people saw him walking and praising God, 10 they recognized him as the same man who used to sit begging at the temple gate called Beautiful, and they were filled with wonder and amazement at what had happened to him."

God was the source of this healing power, yet it took the faith of Peter to call upon God to act, and the faith of the man to accept the gift. This was not the first healing done by Peter and John. But this was the first done in the name of Jesus Christ!  This is the message that the Holy Spirit attests to us:  it is by faith in the name of Jesus that we have salvation, healing, sanctification, and glorification.   Continue to read at verse 11 to see how this interaction played out...

11 While the man held on to Peter and John, all the people were astonished and came running to them in the place called Solomon’s Colonnade. 12 When Peter saw this, he said to them: “Fellow Israelites, why does this surprise you? Why do you stare at us as if by our own power or godliness we had made this man walk? 13 The God of Abraham, Isaac and Jacob, the God of our fathers, has glorified his servant Jesus. You handed him over to be killed, and you disowned him before Pilate, though he had decided to let him go. 14 You disowned the Holy and Righteous One and asked that a murderer be released to you. 15 You killed the author of life, but God raised him from the dead. We are witnesses of this. 16 By faith in the name of Jesus, this man whom you see and know was made strong. It is Jesus’ name and the faith that comes through him that has completely healed him, as you can all see."

Peter and John use this opportunity to present the Gospel message to those witnessing this miracle.  Most typically, the Holy Spirit works in this manner.  The miracle is used to declare the Gospel of Jesus, rarely does a miracle occur in isolation.  Peter and John now have an audience standing before them and they want to learn more.  Peter and John take the opportunity in the remaining verses...

17 “Now, fellow Israelites, I know that you acted in ignorance, as did your leaders. 18 But this is how God fulfilled what he had foretold through all the prophets, saying that his Messiah would suffer. 19 Repent, then, and turn to God, so that your sins may be wiped out, that times of refreshing may come from the Lord, 20 and that he may send the Messiah, who has been appointed for you—even Jesus. 21 Heaven must receive him until the time comes for God to restore everything, as he promised long ago through his holy prophets. 22 For Moses said, ‘The Lord your God will raise up for you a prophet like me from among your own people; you must listen to everything he tells you. 23 Anyone who does not listen to him will be completely cut off from their people.’"

In Isaiah 53:3 we read, He was despised and rejected by mankind, a man of suffering, and familiar with pain.  Like one from whom people hide their faces he was despised, and we held him in low esteem.  Peter and John often use such passages to demonstrate to their fellow Jews that Jesus was the Messiah.  That Jesus was the source of the healing power used to heal.  They continue to make this point in verses 24-24 below.

24 “Indeed, beginning with Samuel, all the prophets who have spoken have foretold these days. 25 And you are heirs of the prophets and of the covenant God made with your fathers. He said to Abraham, ‘Through your offspring all peoples on earth will be blessed.’ 26 When God raised up his servant, he sent him first to you to bless you by turning each of you from your wicked ways.”

Why does Peter use a number of Old Testament characters in his message?

Why does God heal this beggar?